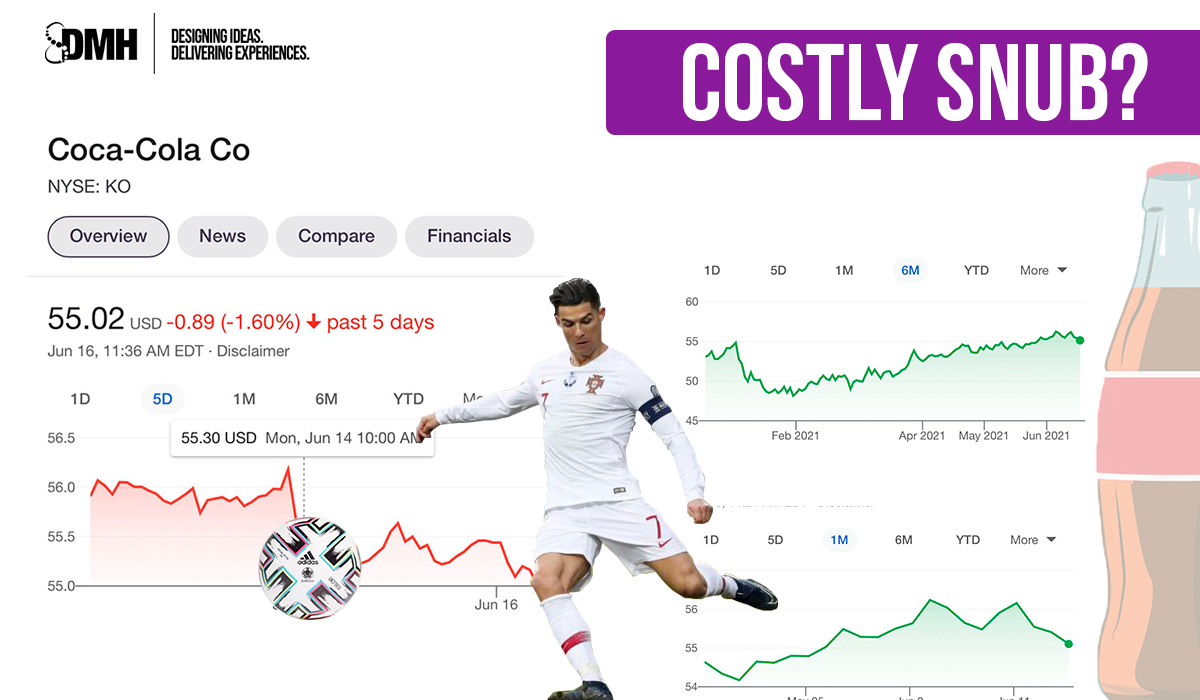 Posted at 10:55h in Uncategorized by admin

Is it totally true that Cristiano Ronaldo was responsible for a dramatic drop of Coca-Cola’s shares in the stock market as has gone viral in social media and news media in the last hours?

Let’s analyze the facts. The Portugal captain went to the press conference on Monday before his national team’s debut match at the Euro. When he saw in front of him two bottles of Coca-Cola, one of the event’s main sponsors, he decided to push them aside and say “Water, Not Coca-Cola” while showing a bottle with the vital liquid.

The action, which seemed to invite to avoid the consumption of the soda, coincided with a day in which Coca-Cola’s share price fell from $56.18 at which it closed on Friday, June 11, to $55.22 at which it started on Monday, June 14, registering a loss of $4 billion for the multinational corporation. Controversy is in sight!

The 1.6% drop meant that the market value fell from $242 billion to US$238 billion. The point is that Coca-Cola’s shares had started to fall shortly before the press conference attended by Cristiano, so we cannot attribute full responsibility for the company’s sharp drop in its share price on Wall Street to him.

Cristiano Ronaldo never has liked soft drinks and has been known to make comments like “I’m hard with him because he drinks Coca-Cola and Fanta sometimes and I’m pissed with him” about his son’s taste for sodas.

And if we analyze further, the fluctuation of Coca-Cola’s share value has been rising over the last year, since on June 26, 2020 it was trading at $43.57 per share, so that specialists in the matter assure that it will not be a surprise to see the value rebound in the next few days. So the alleged blow that Coca-Cola may have suffered from Cristiano, will not be of high impact, but it is still intriguing and encourages the reflection on what an influencer’s action, plus the power and speed of digital news becoming viral, can impact on a brand, person or organization these days.